Tottenham recorded their first victory of the season against Crystal Palace in a hard fought 1-0 win. And it’s a crucial win as it keeps the leading pack within reach.

Tottenham certainly aren’t back to their free flowing best from last season yet but they are undefeated, have points on the board and will feel confident that they can cause the mercurial Liverpool all sorts of problems at the weekend (Kick Off 12:30 BST Saturday).

TFF argued a few weeks back that Vincent Janssen may quickly force his way into the first XI and after a brilliant cameo against Everton he was widely regarded as the man of the match in his first start against Palace.

There is a school of thought that Tottenham may revert to one centre forward against the high press of Liverpool but it would be difficult to deny Janssen on this form. Dare we say that Harry Kane could be more at risk of the axe having not really got going yet in this campaign?

So both would start in TFF’s strongest team and, otherwise, it’s pretty much as you were. Moussa Dembele remains suspended and Victor Wanyama has been excellent in his stead. And Hugo Lloris is still some way from fitness so Vorm continues to be an able understudy.

The only question is how Pochettino might squeeze young superstar Dele Alli into this line up. Perhaps he will have to accept a place on the bench for this one.

So here is out strongest team based on current form. Tottenham fans: discuss…. 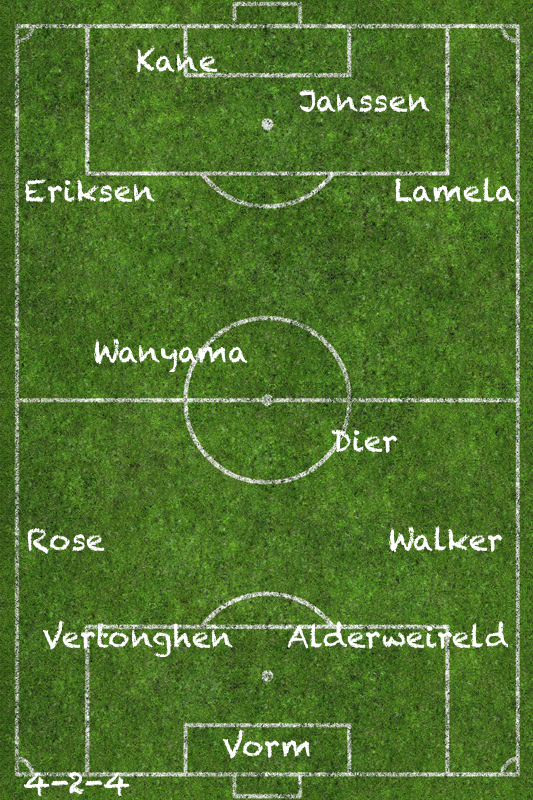