Around this time last year Tottenham started to look like a side which had played too many games.

They faltered at the last and let Leicester in for the title. But this season things couldn’t look more different and although Chelsea have won the title comfortably in the end Tottenham look like the strongest team going into the last few games.

A 6-1 battering of Leicester City on Thursday evening really illustrated how this side has evolved into a sensational outfit under the visionary leadership of Mauricio Pochettino.

Tottenham have got stronger as the season has gone on and if they hadn’t had a slow start they would surely be crowned champions this time. This summer is going to be absolutely crucial for them because not only do they have to hold onto their biggest stars – Eric Dier and Kyle Walker look particularly vulnerable to transfers – but they have to try to improve what is already a superb first XI.

If Walker does leave Tottenham will obviously require another right back. Kieran Trippier has done a decent job when called upon and he will continue to be an able squad member but unless Spurs want to be weaker next season they are going to have to get a player of commensurate quality to Walker.

Dani Alves may not be everyone’s cup of tea at 34 but even if he can give another season at the elite level then he’ll be seen as a good signing for Tottenham.

We genuinely believe that Tottenham should also add pace to their attack. There is so much creativity in that front three already but if they had a man with searing ground speed that would add another string to their bow. How about Douglas Costa?

And if Eric Dier does leave then we could easily imagine Pochettino adding another midfielder. He loves a strong engine room and Moussa Sissoko hasn’t really proven himself as yet.

Perhaps Tottenham could make an audacious move for the much sought-after talents of Monaco midfielder Tiemoue Bakayoko. He looks like the perfect player for Pochettino and we’re certain that he would take him if he could. So here’s how we think Tottenham could line up next season and it is a sensational line up

Tottenham fans – is this a stronger side than you currently have? 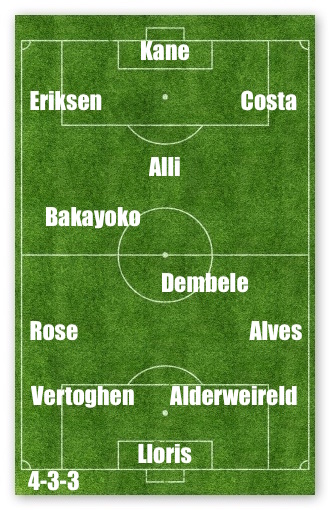