Even the most optimistic Chelsea fan couldn’t have imagined that their new manager would hit the ground running quite so quickly.

But Maurizio Sarri has been a revelation at the club so far, with the players embracing a new style seamlessly.

It’s fortunate that Sarri adopted the right sort of squad to implement his fast paced and attacking methods.

Eden Hazard looks like he’s kicked on again in this system and has been devastating with the ball at his feet this term.

As the season progresses Chelsea may come to see the Europa League as a hindrance with distant away games to be endured on Thursday evenings before important league games at the weekend.

More likely Sarri will view this as the excellent second opportunity to qualify for the Champions League that it most definitely represents.

Such is the competition for the top four league places that it’s no longer a given the Blues will be nestled comfortably in there come May.

And how can the Chelsea boss leave Hazard out on this form? He’s the jewel in the Chelsea crown and, since Diego Costa’s departure, their talisman.

But the supporting cast looks ever more important with the likes of Willian and Pedro showing good form and Jorginho and Kepa slotting in perfectly. And, in defence, Alonso has been absolutely sensational.

All in all it’s happy days for Chelsea fans and TFF thinks that Sarri will put out a strong XI for this one to keep the momentum going.

Our main hope for the season is that Sarri gives substantial game time to a front three comprising Willian, Pedro and Hazard. 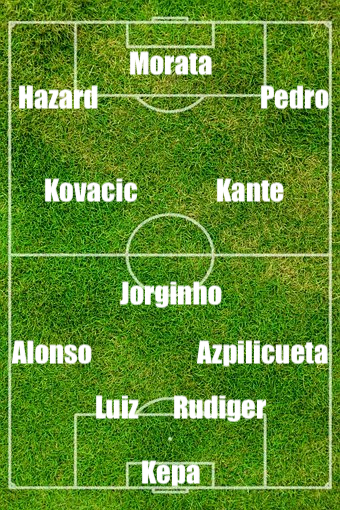