A frustrated Chelsea side could only get one point against Everton in their last league game and dropped to third in the table.

Now, after 12 PL fixtures, the Blues are two points behind Liverpool and four points behind leaders and reigning champions Manchester City. Sarri’s men need to return to winning ways and next up, they will collide against Spurs at the Wembley Stadium on Saturday.

Tottenham defeated Crystal Palace (0-1) away from home in their last game and are currently in fourth place, just a single point behind the Stamford Bridge club.

Who will come out on top?

The Blues do not have any suspension concerns at the moment. However, as far as the injuries are concerned, Croatian international Kovacic missed the UEFA Nations League contest vs England due a leg muscle injury (Ian Dennis BBC) and therefore, it will not come as any surprise if he is out for Chelsea vs Spurs.

If the former Inter Milan man does not recover then we can expect England international Ross Barkley to return to the starting XI. The former Toffees midfielder should partner Kante and summer signing Jorginho in the center of the park.

Sarri has preferred the likes of Azpilicueta, Rudiger, Luiz and Alonso in the defense in front of Spanish goalie Kepa Arrizabalaga. The mentioned stars started in the last game vs Everton and we can expect them to retain their places in the lineup.

Alvaro Morata has netted 4 goals in the last 5 league games for the Blues and he should get the nod to start vs Spurs. Last night, Brazilian star Willian played for 68 minutes vs Cameroon, on the other hand, Pedro was not called up by Spain and rested during the international break. The Spaniard should partner star playmaker Eden Hazard in the attack. 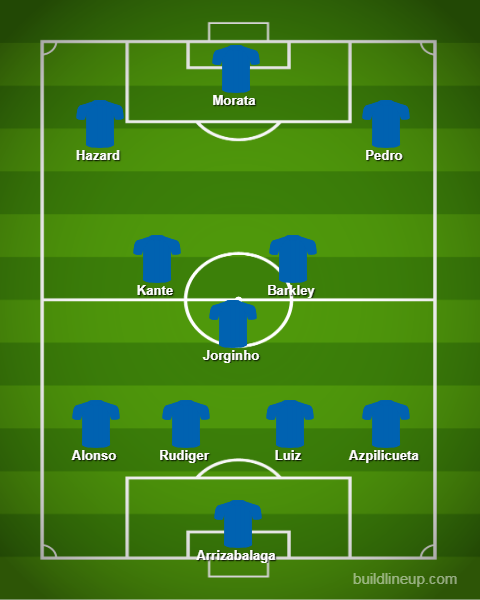