With both Manchester United and Liverpool coming to the boil so impressively over the last months it’s really difficult to pick a combined XI. But TFF has never shirked the tough questions! So here’s our take.

No question about this one. Liverpool’s goalkeeping position remains a problem but Manchester United have one of the very best.

When fit Luke Shaw is one of the best of the lot. But he has struggled for form and fitness and Jose Mourinho is taking his time with the youngster. Meanwhile James Milner has been so steady in his unaccustomed left back role this season that he demands recognition.

Is currently on international duty but has been a titan when fit for Manchester United and this season and is comfortably the pick of the bunch.

Maybe Sir Alex Ferguson was right all along. Because now that he’s enjoying consistent fitness Jones is showing that he can be a top player.

This was a tough call between the Liverpool man and Antonio Valencia who is having one of his best seasons at Manchester United. But Clyne gets into the side for his added pace and ability to beat a man.

Given the choice many to most football fans would take Jordan Henderson for the anchorman role purely because he is younger than Carrick. But credit where credit is due. Even at 35 Carrick has forced his way into the reckoning of Jose Mourinho and has been absolutely pivotal for Manchester United this season.

Both teams have excellent attacking midfielders but Lallana’s form and creativity are impossible to ignore this season.

Has slowly come to the fore at Manchester United and is now starting to boss games.

Even a half fit Coutinho is good enough for this side.

A contentious decision for some but with 17 goals already this season the Swede is proving that he is world class even at 35.

Henrikh Mkhitaryan could well prove to be an even better player than Mane but hasn’t shown it quite enough yet so the frighteningly quick Liverpool man goes into our 11. 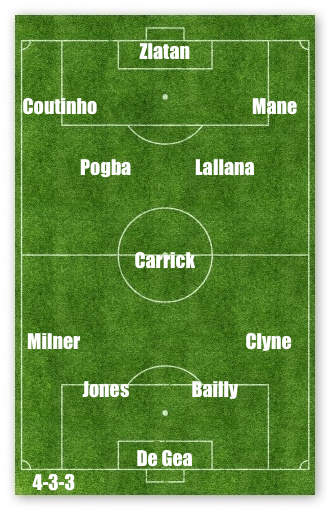