Manchester United returned to winning ways and although their progress is difficult to gauge against League One Northampton, there were some big portents as to the future of the team.

The name on the lips of many Manchester United fans today is that of Michael Carrick. TFF wanted him in the midfield from the off this season and his imperious display on Wednesday night in The EFL Cup adds weight to the theory that he can bring balance to a team of talented individuals.

His passing, positioning and defensive discipline augur well for the reintroduction of Paul Pogba this weekend. Surely Carrick is the man to help unleash the best of the explosive Frenchman?

The sight of Marouane Fellaini returning the fold after 70 minutes left a sour taste in the mouth but most Manchester United fans will hope that Carrick starts against Leicester.

And Jose said of Carrick:

“I don’t want to individualise too much, I think he was fine and I think the midfield worked really well in the control of the game,”

Further forward, while Marcus Rashford scored and created a goal in his 35 minute cameo, Wayne Rooney once more looked leaden-footed and struggled badly to do any damage at the right end of the pitch. He will surely now be taken out of the side this weekend, particularly if Henrikh Mkhitaryan is fit.

If the Armenian returns from his thigh problem, Anthony Martial shakes off his grogginess and Luke Shaw recovers from a slight muscle tear, we could well be looking at Manchester United’s strongest XI for this season.

It certainly now appears to us that this is the best side that Manchester United can put out. And it’s ever more apparent that the selection should be a case of either/or with the inclusion of Zlatan or Rooney at number 9. The team simply doesn’t benefit from two slowing, thirty something strikers.

So here’s the team to take the points against Leicester (fitness permitting).

Manchester United fans: your strongest side? 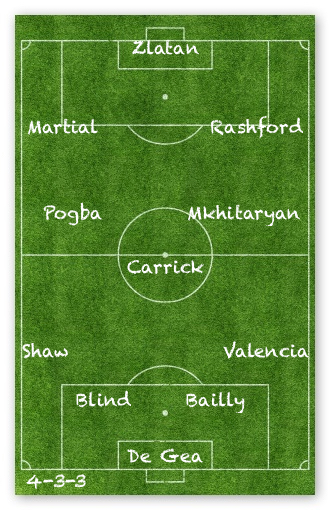