Tottenham recorded two superb 4-1 victories over the Christmas period to prove that none of the squad was at the sherry during the festivities.

And if Tottenham have been too quietly effective this season they seem to have exploded into life at exactly the right time to take on the sensational Chelsea.

TFF feels that if anyone can stop the Blues right now it has to be an in form Spurs at home.

Mauricio Pochettino’s men look suddenly rejuvenated and ready to put in a hard running, high tempo performance such as the one which saw them defeat Manchester City in the autumn.

The injury list is looking pretty positive with only Erik Lamela still out. His return from a hip injury keeps getting pushed back and few will expect him to be involved with this one.

And, in truth, it’s hard to see Tottenham deteriorating too much from the current winning formula. They will be able to welcome back Kyle Walker and Jan Vertonghen to make things even sweeter and potentially add a player to the midfield.

TFF simply can’t wait for this one and feels that it could be one of the games of the season. The neutral would love an early goal to really light up the evening.

So here is TFF’s Tottenham team to take the points. Have a listen to the podcast to get our preview and predictions for the game.

Tottenham fans: is this the side to take three points? 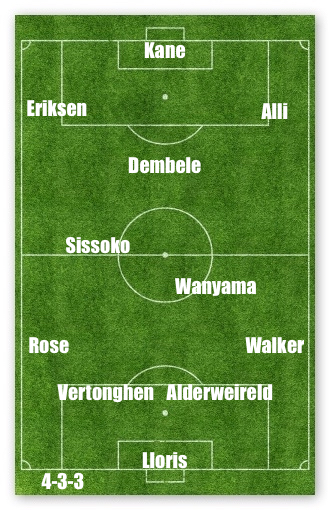