Manchester United look a solid as they have in years. Jose Mourinho is clearly taking the club forward in this respect.

But he still hasn’t managed to fully unlock the door to goals galore at Old Trafford this season and it’s something that he will surely be looking at in the summer.

Because, make no mistake, Mourinho will be prioritising the title next season.

He will surely sign another forward but meantime he needs to get the best out of what he has because there is so much still to play for this season.

Not least the Europa League which may still offer the best route to the Champions League for Manchester United next season.

Few will have FC Rostov down as favourites for this one but they do have the weapon of a hostile home crowd in what will be a long trip for Manchester United.

United have played with a rather attacking midfield of late but perhaps this is the perfect game for the calming influence of veteran Michael Carrick. He can sit in front of the defence and start attacks as well as shielding the back five, as he does so brilliantly.

Henrikh Mkhitaryan has been suffering with a hamstring strain and is touch and go for this one. But, with a crunch clash with Chelsea in the cup next Monday perhaps the in-form Armenian will be rested for this one. Other than that this XI has the genuine pace of Rashford, Martial and Shaw to get behind the opposition defence on the counter.

So here is our XI. Manchester United fans: the team to win the game? 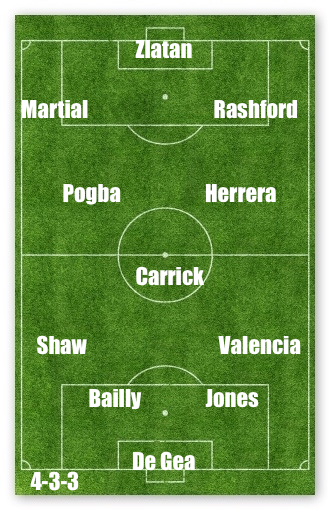