Manchester United have been linked with the stupendous if mercurial talents of Real Madrid star James Rodriguez over the last 24 hours.

It’s an interesting link, particularly as the player’s agent is the same as that of Jose Mourinho – namely Jorge Mendes.

TFF doesn’t doubt the quality of the player and believes that he may well need a change of scenery if he is to truly fulfil his potential.

At 25 he has stagnated for a year and doesn’t look like fighting his way back to the centre of the Madrid team any time soon. His head seems to have gone down a little and Manchester United could be beckoning him, according to British media outlet The Sun.

TFF wonders where he would play because if Manchester United spent £50m on him they would surely be expecting him to start games.

Jose Mourinho seems to favour the 4-3-3 these days. It brings the best out of Paul Pogba and leaves Michael Carrick at the base of the midfield to make United tick.

The obvious thing to do would be to play him on the right of Pogba in a midfield three.

But that would mean leaving out the brilliant Ander Herrera or moving him back to Carrick’s position and dropping the Englishman.

Rodriguez could of course play further forward but the form of Henrikh Mkhitaryan has been superb of late so Anthony Martial may have to miss out as James plays on the left of a forward three.

The other alternative is to play Pobga and Carrick deeper in a 4-2-3-1 and put Rodriguez in the hole.

But TFF thinks that the most likely option would be to try Herrera at the base of the midfield and slowly usher out Carrick. That will have to be the long-term plan anyway as Carrick is already 35.

But the big question remains whether the Spaniard is as suited to the defensive midfield role as the stupendous Carrick.

But here’s how TFF thinks Manchester United might line up if Rodriguez did sign. And what a side! 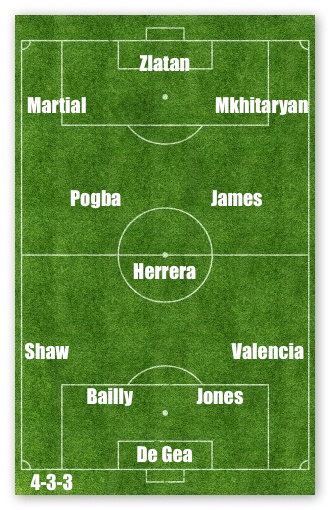