Some see Hull manager Mike Phelan as something of a magician. He did, after all, conjure a winning start to the season with only 13 senior players to choose from.

But he didn’t buy any of those players and they themselves deserve most of the credit for their early season performances. Because, it’s not like Phelan had any selection or formation decisions to make before he signed reinforcements is it? He just played his fittest 11 of the 13.

Never ones to sit on the fence, TFF believes that the ex-Manchester United coach is a very limited football manager who has enjoyed a large helping of lady luck hitherto.

Time will tell but I doubt we are looking at the British Klopp down at Hull.

What does this mean for Liverpool this weekend? Well, we all know that stubborn opposition can cause all sorts of headaches and an early breakthrough could be crucial for the new Red vintage. But we are expecting nothing less than an absolute mauling at the hands of Klopp’s men.

Without wishing to tempt fate, Liverpool now have attacking riches commensurate even with Manchester City. Not only is there a vast array of top creators and finishers in the red ranks, but they all seem to be hitting form at the same time.

Take the flying Sturridge out of the line up and Roberto Firmino will bag you a brace. Remove him and Divock Origi will expertly take the baton.

And the signing of Sadio Mane looks like a huge coup for a side that could well have lost out to Manchester United had Louis van Gaal remained at the helm – he clearly wanted the devastating speedster last season.

We still remain sceptical about the defence. But we remain sceptical about Real Madrid’s defence and they have won The Champions League twice in three seasons. Jurgen Klopp will surely add to his back line over time but Joel Matip is settling in well and Liverpool fans will hope that the much vaunted Karius will provide a long-term solution for the troublesome berth between the sticks.

Sturridge and Wijnaldum are recovering from knocks and could well be fit for the weekend. Fitness permitting, we expect to see a very attacking line up to savour for the newly extended Anfield. 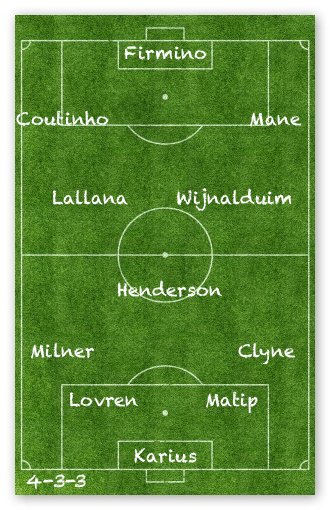