Liverpool fans have seen similar form many times before and too often they have ended seasons empty-handed. But there is surely something different about the current incarnation.

Not only is this Liverpool expected to win every week, but to win spectacularly and by a few goals. We haven’t witnessed excitement like this on Merseyside since Luis Suarez and Raheem Sterling were tearing it up a few seasons back. The difference now is that the team doesn’t rely on two players.

The only injury doubt from the preferred current crop is James Milner and he has a fighting chance of being fit to resume his place in the defence for this one. Otherwise the apparently improving Alberto Moreno may get another stab at redeeming himself at left-back.

TFF thinks that Watford are a really good TEAM who are greater than the sum of their parts. They are fit, very well drilled and won’t lie down at any time.

So the key to a comfortable victory for Liverpool will be to break the deadlock early doors. And Jurgen Klopp’s men seem to have the key to this secret this season and know how to get themselves ahead in the first half.

Should they do this Watford will be forced to come forward and this should play straight into Liverpool’s hands as they counter attack so quickly and from such advanced positions. They seem to turn over possession so high up the park that one or two passes can put them in on goal.

And the goals are flying in at the moment for The Reds. Although Watford will put up a spirited fight, the Liverpool players will be fresh having been wrapped in cotton wool all week and will be hungry for another exhibition of attacking football.

So here’s our best XI, fitness permitting. And it’s starting to get a really familiar look about it.

Liverpool fans: is this now, without doubt, your best XI? 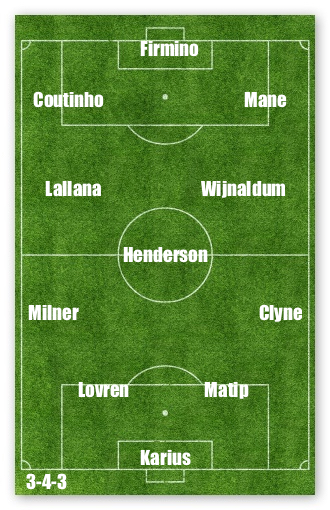