After a horrific run of results at the turn of the year, Liverpool have got their act together at a good time. Because they may be out of the title race but there is still everything to play for in terms of finishing in the top four come the end of May.

Tottenham and Chelsea now look nailed on for the top two spots. Meanwhile Manchester United and Manchester City have also picked up the pace of late and their results have improved as the season enters its final throes.

In short, Liverpool have to keep winning. Two vital away victories at stubborn Stoke and well-drilled West Brom could prove pivotal at season end but they won’t count for anything if Liverpool can’t capture all three points against an improving Crystal Palace.

Liverpool currently have seven injuries and all of Klavan, Lallana, Henderson, Ejaria and Mane are unlikely to be ready for another stiff test of the Reds’ Champions League credentials.

So the team should look a lot like the one that dispatched West From on Sunday.

TFF has seen the likes of Emre Can grow into the team over recent weeks and he will surely make the permanent transition from squad member and utility player to first team regular next season.

Another element of note is how Lovren and Matip are developing into a much more solid partnership at the back as Liverpool’s defence has started to look more solid again of late.

So here is how TFF thinks that Liverpool should line up to beat a Crystal Palace side in decent form. 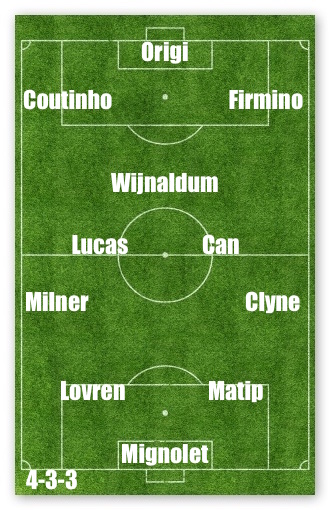