Very few were expecting anything but three points for Liverpool against Swansea at Anfield at the weekend. TFF was predicting a cricket score but such is the unpredictability of the Premier League that the almost impossible happened.

Fernando Llorente’s quickfire double and Gylfi Sigurdsson’s winner 16 minutes from time condemned Liverpool to a very unusual defeat and saw them fall off the pace in the title race.

But Jurgen Klopp is nothing if not a great motivator and the team will not be short of motivation as they welcome Southampton to Anfield on Wednesday night in what remains a compelling tie of the midweek.

Liverpool have suffered in attack since Sadio Mane left for the African Cup of Nations and they haven’t had quite the pace or menace on the counter.

But they do have superb understudies with the likes of Daniel Sturridge and Divock Origi and a largely fit squad to pick from.

TFF thinks that it’s time to use Sturridge through the middle with Firmino and Coutinho either side. They will surely have a right go at Southampton because anything less than a commanding win and the Reds will be waving goodbye to the chance of another repine of silverware.

So here is how TFF thinks that Liverpool should line up and we are going for all out attack rather than adding extra steel, in the shape of Emre Can, to the midfield.

Liverpool fans: is this the team to dismantle Southampton? 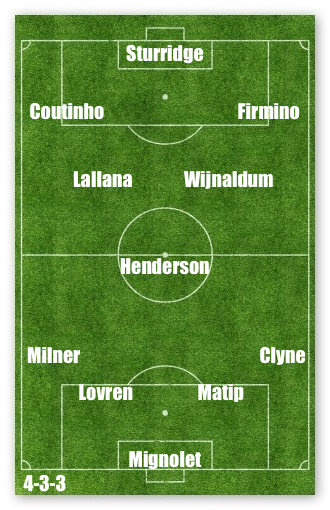