Liverpool have been breaking through glass ceilings all season. They have been winning away games against traditional banana skin opponents and beating the big boys like Manchester City, without conceding a goal.

After so many false dawns of late they are whispering it quietly at Anfield but Liverpool do look like serious title contenders this season.

They have unbelievable pace and penetration going forward and if they can continue to tighten up that defence over the next couple of transfer windows they will not only be a compelling force in the Premier League but also in Europe over the next few seasons. And their manager has got the big between his teeth and looks like he’s going to stay at the club long term.

That can only be good news for a Liverpool side which looks like they are really enjoying their football and scoring goals for fun.

So much so that it’s very possible that they could get passed Manchester United this weekend. United themselves have enjoyed a resurgence under their new manager and look much more study and threatening going forward. But Liverpool still possibly have the better attack and if they can score a couple goals on the counter they can stun Manchester United.

They do have seven injury doubts at the moment but five of those – Milner, Henderson, Matip, Grujic and Coutinho – are all in contention for a return to the side.

So here is how we see Liverpool lining up, fitness permitting. And there is a very familiar look about this side.

Liverpool fans: would you make any changes to this line up? 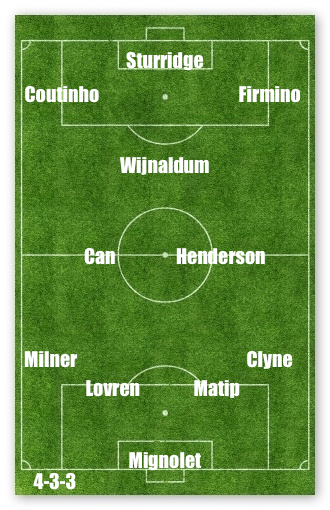