Liverpool would of course have played for three points against Chelsea in the big game of the week.

But, especially after going one-nil down to a rampant Chelsea side, Liverpool will be happy with the mettle they showed to get back into the game.

The Blues arguably finished stronger and they increasingly seem destined to take the title, with just 15 games to go and 9 points clear.

What Liverpool must focus on now is once more finding their form to keep them ahead of the likes of the Manchester clubs. And the return to the fold of Sadio Mane can’t come quickly enough.

He made a substitute appearance against the Blues and will surely start against Hull in an away game that Liverpool simply must win at the weekend.

Hull made more signings than anyone in the window but the Liverpool of autumn would still take them to the cleaners and be concerned only with vastly improving their goal difference.

Apart from the return of Mane Liverpool’s injury news is positive with no serious casualties from a draining game against the league leaders.

So here is our Liverpool side to put some points on the board against Hull and the big question, as usually, is whether Jurgen Klopp utilises the midfield presence of Emre Can instead of a more attacking player. But we feel he can afford to take the handbrake off against these opponents. 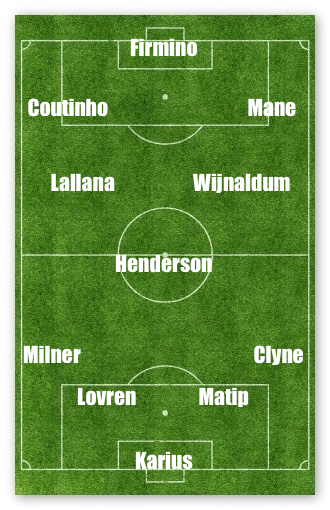