A couple of weeks ago Liverpool looked as if they couldn’t lose, even they really tried to.

The goals were flowing and they looked as if they would outscore anyone they played.

The problem remained that they were also conceding goals. So when master creator Coutinho got injured, the supply lines dried up to an extent.

Liverpool have still looked dangerous in the last couple of games, albeit in a loss and a draw.

And TFF suspects that if they really want to maintain their title challenge into the spring and beyond then they will have to add one or two top quality defenders to the mix.

Another goalkeeper would be on TFFs wishlist and if Sakho leaves the club then a really dominant centre back would also improve the first XI.

Liverpool are still frightening going forward but Daniel Sturridge may also miss this one after picking up a recent knock.

If he does miss the game then perhaps we could see a start for the usually impressive Divock Origi in a slightly reshuffled side.

Here is how we think Liverpool could line up in a game which looks tricky but which the reds simply have to win if they want to maintain their position in the top echelons of the league title chase.

Liverpool fans: Would you throw Origi in or add Can to the side for more solidity in this tough away tie? 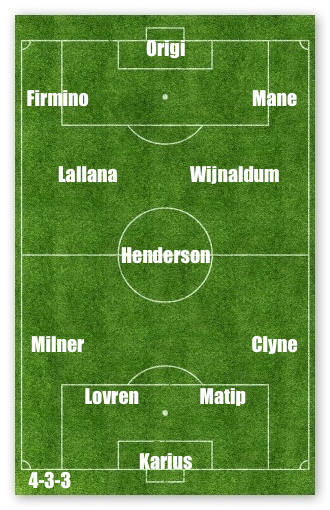