TFF talked yesterday about how the Merseyside derby would be a true test of Liverpool’s title credentials.

And even though it took them until injury time to make the decisive contribution, they took the points and possibly just about deserved them.

They were the inferior side in the first half as Everton threw everything at them with their high energy game.

But Liverpool didn’t buckle and their defence was unusually strong in the face of pressure from a good team.

And, as the game wore on, Liverpool started to look ominously aggressive.

But they still required an injury time winner which left the Liverpool fans in raptures.

How much will this mean at the end of the season? Well the best answer is that it depends on what they do against teams like Stoke, in their next game. Can they follow up on a massive win with another three points?

Too often in the past inconsistency has been their undoing and it’s been symptomatic of Jurgen Klopp’s time at the club too. But he seems to have slowly but surely ironed out those inconsistencies and now we are surely looking at a side which can go all the way – especially if they add another top defender and or keeper in January.

Daniel Sturridge returned against Everton and his speed in front of goal will be a great boost for a team which is certainly missing Philippe Coutinho. We are making Sturridge our key change to the side and giving him a shot on the left of a 4-3-3.

Coutinho is one of five injuries which include Danny Ings and Adam Bogdan. But the other two, Joel Matip and Marco Grujic could be back in the squad for what is always a tough encounter. The game will be played at 17:15 local time on Tuesday 27th December.

Here’s our line up. Liverpool fans – would you start Strurridge or Origi? 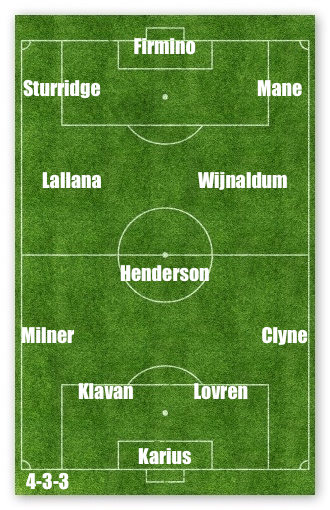