After four games without a victory, Manchester United return to winning ways by beating Newcastle United in their last PL contest. Next up, the Red Devils will face high flying Chelsea at Stamford Bridge.

The Old Trafford club are 7 points behind the Blues and 5 points behind Arsenal, who currently occupy the final CL qualification spot. Another defeat will make things even worse for Jose Mourinho, who is already under immense pressure.

As far as Manchester United team news is concerned, Luke Shaw withdrew from England duty due to injury so he might not start for United. In his place, we can expect Ashley Young to start in the left back position. The former Aston Villa man should partner Lindelof, Smalling and Valencia in the back line in front of De Gea.

On the other hand, Sky Sports have reported that Serbian international Nemanja Matic could miss the contest against his former club.

Therefore, Fred should start as the main defensive midfielder. The likes of Fellaini and Pogba should partner the Brazilian in the center of the park.

In the attack, Rashford impressed for England and he should start with Sanchez and Lukaku up front. Here is Man Utd’s strongest possible 4-3-3 XI vs Chelsea. 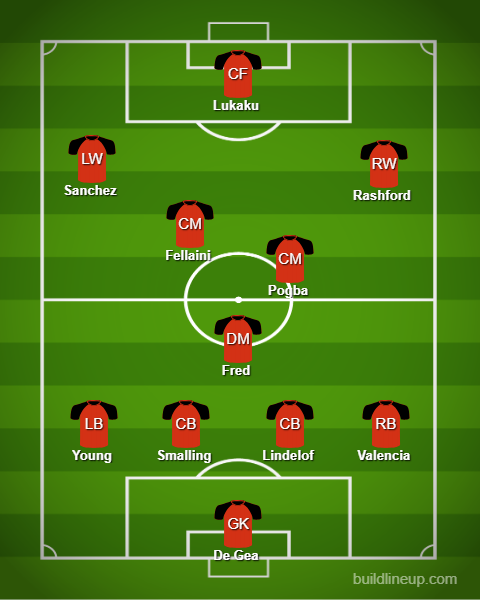