Manchester City will be able to unveil their latest arrival in the coming days as Gabriel Jesus touches down to start his career at the club.

It’s a bold statement to suggest that he could become Manchester City’s best signing ever – the 19-year-old still has it all to prove.

And to be compared favourably to the likes of Yaya Toure, David Silva and Sergio Aguero will take some doing.

But none of those Manchester City legends have yet won the Ballon D’Or and the former coach of Jesus, Jose Francisco Mamede, reckons that this guy will be winning it within three years.

He is quoted in British media outlet, The Daily Mail, as saying:

‘Gabriel came from a very poor neighbourhood and that’s why he’s not afraid.’

‘He will adapt to the food, to the cold in Manchester and everything else.

‘In three years he’ll win the Ballon d’Or, because [Lionel] Messi will already be getting a bit old.’

Bu TFF is inordinately excited about the prospect of Jesus playing in England.

He may be used, to begin with, as cover for Sergio Aguero.

But we don’t think it will be long before Jesus is occupying one of the wide berths in the side in what may look more like a 4-3-3.

Imagine a side with De Bruyne and Jesus either side of Aguero in a 4-3-3 with Toure and Silva in advance of Fernandinho in the midfield? What a team.

The defence still needs some ironing out, particularly in the wide areas, ofter the next couple of windows.

But we could easily imagine Manchester City settling into this sort of formation in the coming months, as Jesus absolutely forces his way into the side.

So here is how we think City could line up in their strongest XI next year. Manchester City fans: anyone missing? 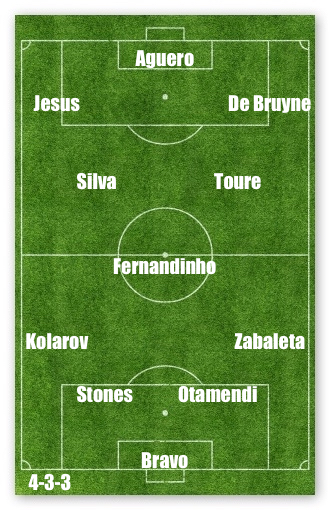