Manchester United gave a vastly improved account of themselves against the champions Leicester at Old Trafford last weekend and fans of the club will hope that Jose Mourinho can massage this momentum over the coming months.

Because United scored four goals in the first half for the first time since 2006 in a 20 minute blitz which left many speechless.

The omission of Wayne Rooney seemed to make the team quicker and less clunky and his days as a certain starter in the biggest games look numbered.

He will, however, remain a vital squad member and could well start again on Thursday with Manchester United playing two games per week right now.

Daley Blind did a superb job at left-back on Saturday and Luke Shaw will have serious competition for his place when fit again. But TFF feels that Manchester United’s team was at least two players light of their best XI on Saturday.

When Anthony Martial is fit he must start ahead of Lingard. And we have yet to see the sublime talents of Henrikh Mkhitarayan. In a 45 minute debut reminiscent of Patrice Evra, the Armenian had an absolute shocker against City (the club against whom Evra also made his debut). But we all know how well the Frenchman performed after that and we feel that Mkhitaryan will also be a supreme player for United when he finally gets some form and fitness.

He is due back any time and TFF thinks that an eminently winnable game in The Europa League at Old Trafford would be the perfect way to reintroduce the 27-year-old to the fold.

We could be about to see the start of a great Manchester United career.

So here is our XI for the game, with fresh legs and some rested ahead of the Stoke game at the weekend. Untied fans: discuss. 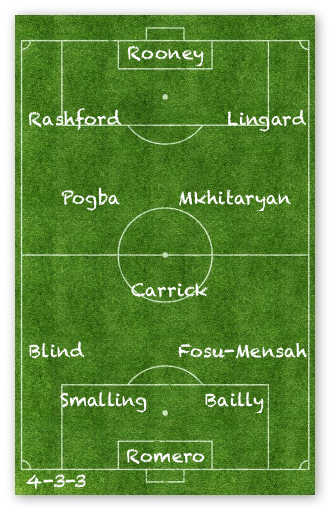