It is almost becoming a running joke now with Manchester United and their home games in the Premier League this season.

Where a vintage Sir Alex Ferguson side would have dispatched Swansea with their eyes closed, Manchester United remain stodgy under José Mourinho at Old Trafford.

Nine games in April certainly isn’t ideal but Manchester United were in a great position to go forth in the Premier League with a victory over Swansea.

They couldn’t manage it and that will be of real concern to the fans ahead of the other potential gateway into the Champions League next season.

Because Celta Vigo will provide stiffer competition to Manchester United than Anderlecht – a team which the Red Devils struggled to get past in the quarter-finals.

It’s going to be a gruelling tie over two legs and Manchester United absolutely must inject some cutting edge up top and get some goals under their belt early in this game if they want to be comfortable and in control.

Wayne Rooney is really fresh and has been playing more games of late for Manchester United. But TFF still thinks that Anthony Martial and Marcus Rashford must start these crucial games in tandem to bring pace and penetration to the side.

With Zlatan out for the rest of the season we like the idea of a front three which involves the Manchester United captain and the two youngsters.

Rooney may have lost some of his mobility but he is still a brilliant finisher and with the sort of service that Martial and Rashford can provide we see Manchester United getting over the line in this one.

Injuries are a real concern now for Jose Mourinho. Timothy Fosu-Mensah, Marcos Rojo and Zlatan are all definitely out.

And Luke Shaw, Eric Bailly, Chris Smalling and Phil Jones are all doubtful for this one.

José Mourinho will be desperate for Paul Pogba to play this one as he brings such authority and energy to the midfield.

TFF is expecting a frantic and exciting game with two sides who can attack really well on form. We see Manchester United getting to the final over two legs but this certainly isn’t a foregone conclusion.

Here is TFF’s strongest XI for the game. 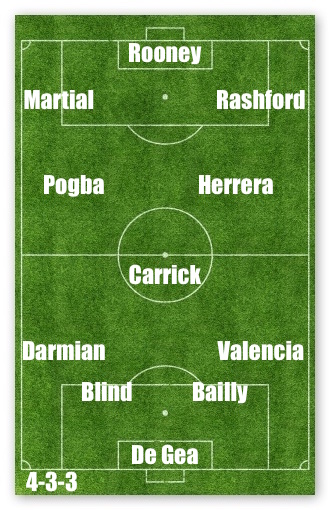