Having watched the entire game between Manchester United and Everton on Tuesday night TFF was left to surmise that Manchester United’s style of play has regressed to the level of Louis van Gaal. Far too often Manchester United players played a sideways or backwards passes when they could easily have threaded a 10 yard pass forwards which could have got them behind the Everton defence.

We feel that the quality is there but the main difference between Manchester United and Chelsea right now is confidence. Having watch Manchester City play against Chelsea at Stamford Bridge on Wednesday night both sides were far more daring in their passing play and were prepared to risk losing the ball if it meant making a devastating forward pass.

Manchester United have some huge games coming up at home and in Europe and who is to say they can’t finish the season strongly? They do have a full complement to pick from with Zlatan and Pogba now back in the fold.

TFF feels that Manchester United could actually do pretty well in the six pointers against the likes of Arsenal, Tottenham, Manchester City and Chelsea. We have seen United struggle against lesser sides at Old Trafford but perhaps when teams are coming onto them with more quality that will create more space behind the opposition defences and more chances for Manchester United score. At this point of the season every team seems to be parking the bus against the reds.

It will certainly be fascinating to see how they get on over the next couple of months and this is how we feel they should line up against Sunderland if they want to take the points. We think that it’s young Luke Shaw’s time to shine after a rocky few months. 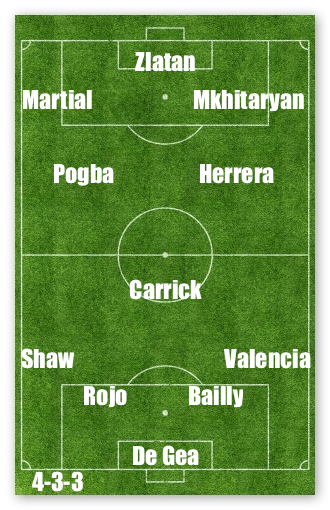