Manchester United may be 14 points off the pace with 16 games to go in the league this season. But there are undoubted signs of improvement at the club under Jose Mourinho.

United have lost the same number of games (3) as runaway leaders Chelsea and had they been able to turn more of those eight frustrating draws into wins then they may well be challenging for the top spot already.

But they aren’t too far away and a couple more top quality additions will see them challenging for domestic honours next term.

TFF has been covering the transfer hype throughout January and although Manchester United clearly haven’t been one of the biggest movers and shakers in the winter market, the two players most often linked have been Victor Lindelof and Antoine Griezmann.

Manchester United have good depth in both areas of their squad. In defence, Marcos Rojo and Phil Jones have been the surprise successes of the season in the absence, through injury, of Chris Smalling and Eric Bailly.

And up top Zlatan has been a revelation and kept Wayne Rooney out of the side.

But Manchester United could still be a more free flowing side and with the addition of these true A-listers TFF feels that the side could get over the line in terms of winning that hallowed Premier League trophy – a title that United haven’t won since 2013.

If they are going to win it before five years is up, then they may need to add the ruthless class of Antoine Griezmann and Victor Lindelof.

Griezmann is an artist in the area of goalscoring – much more about precision than power – and TFF feels he would be a revelation at the club.

As for Lindelof, he can be the foundation for so many good moves with his passing out of defence which is reminiscent of Rio Ferdinand in his pomp.

With these two stars added, the team will no doubt be pushing for the title next season. 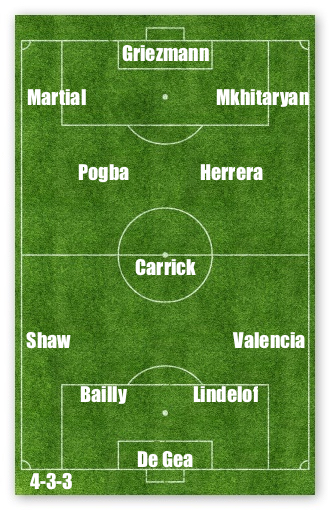