Manchester United have such a good squad these days that major surgery clearly isn’t required.

Some attention must be given to the full back areas. On the right a more specialist right back will eventually replace Antonio Valencia. And Luke Shaw needs to nail down his starting spot on the left quickly if United aren’t to delve back into he market over the coming windows.

And in the centre of midfield Manchester United will already be looking for a natural successor to the superb Michael Carrick.

Apart from those three positions the only one that TFF feels needs strengthening long term is at centre forward.

Zlatan has scored 19 goals in 29 games this season and even Manchester United haters must be impressed by the prowess of the 35-year-old. He’s been a sensation and has quickly become United’s leader.

But he will not be able to lead the line forever and Antoine Griezmann, who came third in the Ballon D’Or awards in 2016, increasingly looks like the man to fill the boots of the Swede.

Reports continue to suggest that the player and club are both keen to make a deal happen this summer and TFF has no doubts that Griezmann would be a huge success at Manchester United. He’s much more Alexis Sanchez than Zlatan – a player who works in the margins and causes absolute havoc with his pace, movement and unerring eye for the finish.

He will change the style of the Manchester United forward line. He’ll make them more pacy and edgy going forward with less of a target man system and more of a fluid front three who can interchange.

Of course Griezmann started his career on the wing and he may well play there in the odd game with Zlatan through the middle. Overall it just gives Manchester United so many options in attack and we can really see another great side forming under Jose Mourinho.

Here is our suggested XI with Griezmann potentially on his way. 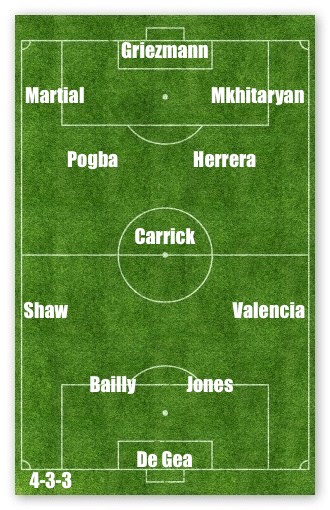