As soon as TFF looked at the team sheet for Manchester United vs West Ham we thought ‘too much tinkering!’

It will take a long while and a lot more poor results for our faith in Mourinho to fully erode. But just when he needed some momentum he made 6 changes to a side which finally looked fluent against Feyenoord in the week.

The early goal was obviously a sucker punch but Manchester United had more than enough time to reprieve themselves and teams of old would have done so.

Manchester United were unlucky not to go ahead in the first half but they lost their way for the first 20 minutes of the second period and this once more put them in the unenviable position of chasing the win with tired legs in the last quarter. Top teams put mediocre teams to bed well before this period.

Only the most optimistic would bet on United overhauling Chelsea and Liverpool at the top now. But they can still achieve a top four finish and win a couple of cups.

And they will want revenge on a stubborn West Ham side after dropping more precious points on Sunday.

Pogba is suspended for this one so we could well see a return for Michael Carrick and/or Wayne Rooney. Henrikh Mkhitaryan also tends to quicken the pulses and he should be getting more minutes.

So here is our line up for a semi-final spot for Manchester United. And surely Michael Carrick has to be reinstated into the team. 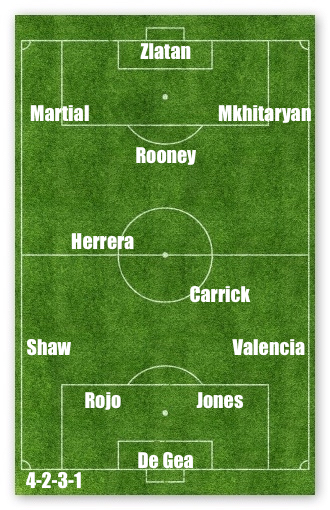