Manchester United are now unbeaten in 11 games in all competitions and must be happy with their progress under Jose Mourinho. But their last two games have ended in draws and this has seen them drop off the top four pace again.

Thursday night will bring a little respite from league matters however and Manchester United must be strong favourites for another Wembley appearance with a 2-0 advantage against struggling Hull going into the game.

Manchester United may rest a few stars but will still want to attacking with purpose and Jose Mourinho certainly has some impressive weapons at hand if he chooses to use them.

The Manchester United boss once more frustrated the fans by leaving Anthony Martial out of the game against Stoke.

The Frenchman has been on fire of late and how United could have used his pacy skills on the wing at the Potteries.

But he will hopefully be employed again in a match that Manchester United need to score early on put this one to bed before Hull get up a head of steam.

Martial and Mkhitaryan should start in what will likely be a very attacking line with the sole aim of destroying the hapless Hull.

So here is how TFF thinks Manchester United should line up. Marcos Rojo is suffering an illness and may be rested for this one, with Chris Smalling coming in. The only other injury is to James Wilson, who is out long-term with an ACL injury. 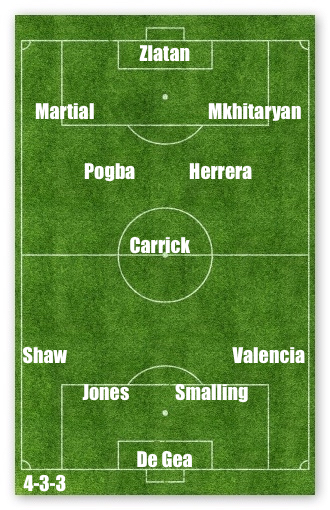