With Manchester United repeatedly wasting opportunities to get into the top four this season The Europa League looks, more than ever, to be their best route to Champions League football.

Arsenal, Liverpool and Manchester City have dropped points but Manchester United haven’t been able to capitalise and if they are to attract top players to the club this summer they will surely have to be in Europe’s top competition.

Anderlecht are nowhere near Manchester United’s level and their only feasible route to the Semi-finals is to record a shock win in the home leg, which takes place on Thursday evening.

Manchester United manager Jose Mourinho will know an away goal is important but will also want to guard against conceding too many.

So perhaps he will deploy a 4-2-3-1 with Paul Pogba in the more withdrawn role which we have seen him in many times this season.

His talents possibly aren’t best deployed there but he is a good box-to-box midfielder and will be a decent shield for the defence, alongside Ander Herrera or Micheal Carrick.

Manchester United have eight injuries and there is little chance of Juan Mata, Phil Jones or Chris Smalling making the game.

Rooney, De Gea and Young could all miss out too but Antonio Valencia has a fighting chance of being fit.

So Manchester United can call on most of their big hitters for perhaps their most important game of the season so far.

Here is how TFF believes that they should line up and it’s a 4-2-3-1 with added cover for the defense but some bite and pace in attack.

Manchester United fans: is this line up too defensive? 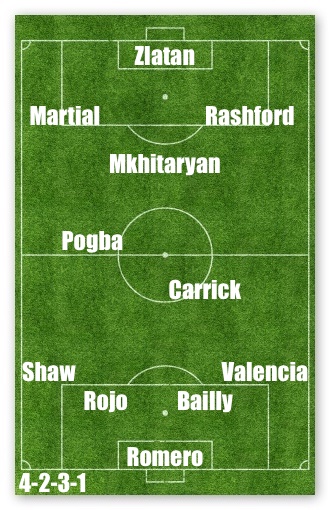