Manchester United still aren’t scoring freely but, in most other aspects of their game, there is obvious improvement from this time last year.

Not only have they become extremely hard to beat – they haven’t lost in the league since the 4-0 drubbing at Chelsea back in the autumn – but they are passing the ball with more purpose and getting much closer to the finished article.

And despite their recent travails Arsenal will provide one of the sternest challenges yet to Manchester United’s unbeaten record at The Emirates this weekend.

The Sunday teatime clash will offer Arsenal the chance to repair some of the damage of recent weeks and they will surely go into the game with an attacking mindset.

This could play into Manchester United’s hands as they tend to play better against teams that come onto them instead parking the bus.

Manchester United have had a lot of injuries to deal with of late but there was some relief to the list this week as Phil Jones, Paul Pogba and Chris Smalling returned to fitness. Ashley Young hobbled out of the Europa League semi final first leg against Celta Vigo on Thursday, as did star man Marcus Rashford. But the latter looked more fatigued than injured.

This one looks very much to TFF as if it will finish in a scoring draw and here is how we see Manchester United lining up, with the crucial second leg of their Europa League match to play next week.

Manchester United fans: can this XI get past Arsenal on their own patch? 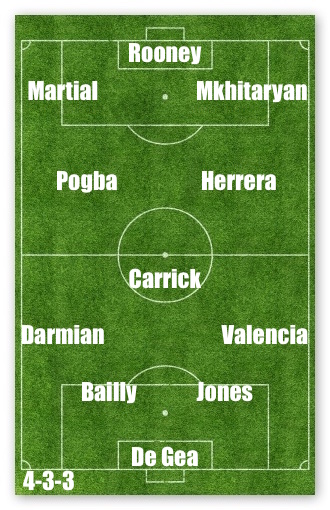