Manchester United’s problem this season has been a lack of momentum. They too often follow up a convincing performance in Europe with a draw in the league.

But most would now agree that this is a team which is markedly improving.

If Louis van Gaal’s teams were characterised by the tedious sideways passing, then Jose’s sides have more urgency and get the ball from back to front in a much more efficient manner.

But it’s definitely coming together in terms of performance levels as Jose’s class as a manager is starting to shine through.

Ander Herrera has been one of the stand out performers this season. He was unlucky not to get Man of The Match against Tottenham in another game where he not only showed his obvious class but also a hitherto unseen grit and desire to get stuck in.

He has surely now forced his way into the side for the big games and that means the formation changing to a 4-3-3 to accommodate him.

With Henrikh Mkhitaryan out for a couple weeks that formation may have to be shelved for now. Alternatively, Jose could simply swap out Henrikh for Rashford on the right side. Rashford is of course still raw and perhaps doesn’t have quite the creativity of Mkhitaryan. But he is a wonderful crosser of the ball, can beat his man and scores goals. So he would be the only major change to the starting line up for us.

So here is our XI for a game which Manchester United must surely win. 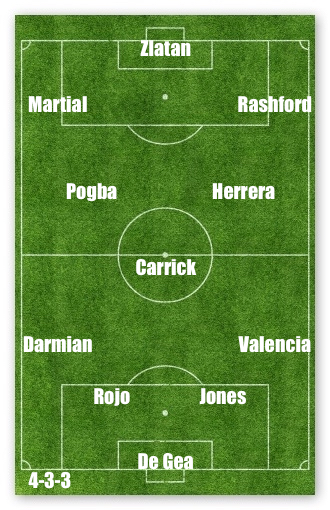