Manchester United snuck past Rostov in a rather uninspired encounter at Old Trafford on Thursday night.

As United enter the business end of the season injuries are beginning to mount and fatigue could be playing a part.

Paul Pogba is out with a hamstring injury and he is the highest profile absentee from a side which could also be shorn of Daley Blind, Wayne Rooney and Anthony Martial.

Perhaps Martial is the most likely to return from that trio. And given that Zlatan is serving the second of a three match ban, TFF believes that Marcus Rashford has a very good chance of starting a game that Manchester United absolutely must win if they are to get back in the running for top four.

They are currently six points behind fourth placed Liverpool but with two games in hand. With no more Europa League involvement until mid April now is the time for United to summons a big push.

So TFF is giving Martial the benefit of the doubt and playing him alongside Mkhitaryan and Rashford in a three man attack. We think that the Frenchman likes to play in the middle so he should get another chance to be the focal point of the attack.

With that in mind here is our XI for the tough trip to Middlesbrough.

Manchester United fans: is this XI good enough to get pass Boro? 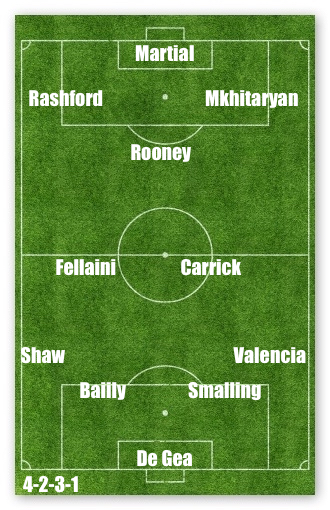