With two impressive away wins at tough opponents in the bag of late there is a genuine sense now that Manchester United have found their rudder after three years adrift.

A great quality of Jose Mourinho, and one that sets him apart, is his resilience. His robust refusal to fold after a few knocks.

He has stayed true to his plan at Manchester United and it’s working. Zlatan has scored 15 goals already. Paul Pogba is starting to dictate games. And Henrikh Mkhitaryan looks like Manchester United’s most dangerous attacker when fit.

In this form most would expect Manchester United to summons another win and keep things ticking over nicely.

Henrikh Mkhitaryan and Eric Bailly both have a fighting chance of making the squad for the Monday afternoon kick off at Old Trafford but both may be used sparingly given the packed fixture list ahead.

One of the most disappointing elements of a general positive scene is that Anthony Martial remains on the peripheries of the team despite some excellent form of late.

Manchester United fans love to see wide play and hopefully both he and Mkhitaryan will be back to terrorising the opponent come boxing day.

So here is how TFF would like to see Manchester United line up to give the fans a great late Christmas present in the form of a resounding and entertaining win.

United fans: is this currently the strongest XI on form? 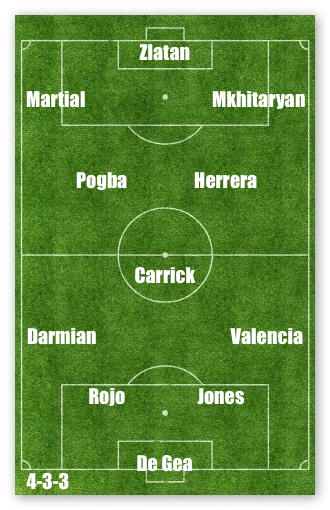