So this one is big. After six straight wins in the league Manchester United find themselves just five points behind Liverpool and three off the Champions League places.

But all of that good work of late will feel as if it has been in vain if they don’t take three points off Liverpool at Old Trafford in the game of the weekend this Sunday.

There is a real sense of style returning to Manchester United under Jose Mourinho and whilst they haven’t quite got that swagger of old back they have certainly instilled some of the pride of old.

Manchester United do have a couple of injury problems and one to a player who has been a real surprise package this season. But it’s a short injury list which comprises James Wilson and Marcos Rojo.

Rojo pulled up with a muscle strain in the FA cup game against Reading at the weekend and looks like a major doubt for this one. Thankfully, even though Eric Bailly is now on international duty at the African Cup of Nations, United do have cover in the shape of the fit again Chris Smalling.

Apart from that Manchester United could field what TFF perceives to be the strongest side. Anthony Martial was brilliant against Reading and surely he deserves a place in the strongest line up right now with Henrikh Mkhitaryan on the other side.

There is a settled look about this Manchester United team and we think that it’s by far and away the best possible side to take the points against a brilliant Liverpool side.

So here’s our pacy XI for the game of the weekend. Manchester United fans: what are your thoughts? 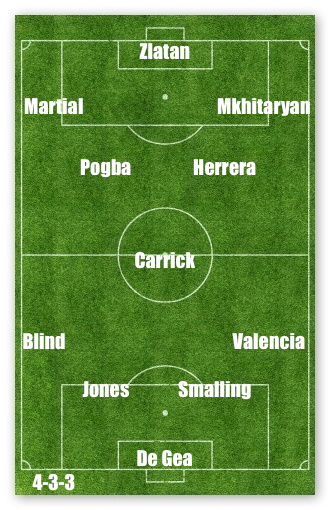