Liverpool probably should have won the NW derby at Anfield on Monday night. Although Zlatan had a gilt-edged opportunity to head the visitors in front in the second half, Liverpool had more threatening possession and more chances to win what was a very tight game.

But a 0-0 draw leaves things largely as you were and Liverpool have no reason to think that their form is deserting them.

They were, after all, shorn of two of their most creative players and the front 5 looks eminently more menacing with Adam Lallana and Georginio Wijnaldum in it.

West Brom will surely prove to be stubborn opponents and the key to this game could be an early goal for the hosts.

The temptation would, of course, be to reunite this attacking quintet and that may well happen.

But we all know that hamstrings can be tricky and Klopp may decide that, in the face of the only slightly above average opponent, that he can afford to bring Wijnaldum off the bench with an hour gone, as he did with Lallana against United.

So we think Emre Can could get another start and Henderson might be pushed a little further forward, alongside the returning England international, Lallana. Or Coutinho could play a little deeper again allowing Daniel Sturridge another start.

Apart from that, it’s pretty much as you were. We would like to see Sturridge start and Liverpool play a really attacking formation in a game that they must surely win if they want the title.

James Milner didn’t train on Wednesday but we will assume that his absence was just a precaution. 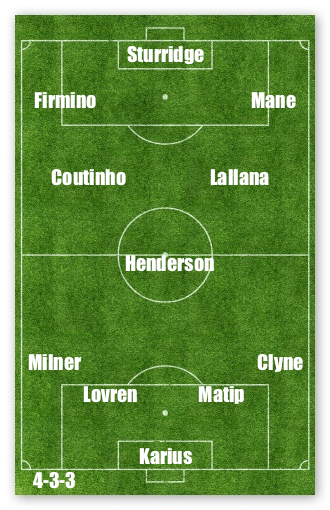