TFF regularly opines that football is over complicated by managers these days. Because we believe that the best forward lines generally win the top competitions domestically and in European competition.

Sure it’s good to have solid foundations and a back line can win you matches. But when you look at the serial winners in Europe over the last 10 years Real Madrid and Barcelona have undoubtedly had the best front threes. The likes of Messi, Suarez, Neymar, Ronaldo, Benzema and Bale make it impossible for opponents to keep a clean sheet.

Scoring more goals than the opposition wins matches and the firepower that Real Madrid showed in the Champions League final against Juventus was by far and away the key factor in their dominance.

And TFF believe that Manchester United could form a similarly ruthless front line if they were to buy Kylian Mbappe of Monaco.

Sure a front line of Rashford, Martial and Mbappe would lack experience and they wouldn’t click straightaway.

But imagine if they put Zlatan in at number 10 to pull the strings and add composure and litter the game with fantastic passes for those frighteningly quick front three?

With Pogba and Herrera to anchor the midfield and a solid back five already we believe that the signing of Mbappe could accelerate Manchester United’s progress immeasurably. In the space of the next 2-6 years that front three could score 20 to 30 goals each per season and completely blitz the opposition. José Mourinho needs to be bold but we think that with that one addition Manchester United could once again dominate Europe.

So here is the 11 to rule the world. Manchester United fans – the perfect team? 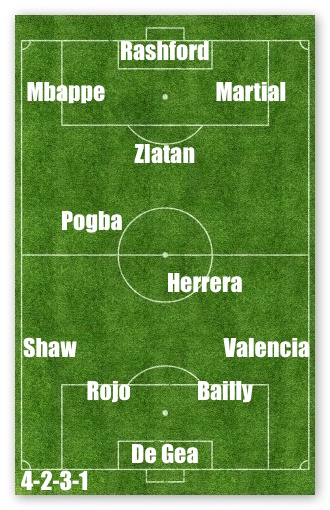