It wasn’t that easy to gauge the performance of Liverpool against Hull, considering that they only scored one of their 5 goals before Hull went down to ten men.

But 5-1 is 5-1 and few at Anfield will give a hoot about the sending off. The fact is that Liverpool are competing with Manchester City right now for the title of most fearsome and free flowing attacking EPL side.

Sadio Mane continues to look like the buy of the summer and he adds the sort of frightening zip that seems to make Liverpool click.

Not only does he himself make a great contribution but he occupies the resources of the opponents to give other Liverpool players more space and freedom to express themselves.

The other contentious issue is whether Liverpool fans would rather be involved in European action this season. While TFF still believes that the majority would answer ‘yes’ – the absence of midweek football should pain any true footy fan – this could provide Liverpool with their best chance in years to summon a lasting title charge. And a place in the top four remains a priority.

We seem to say the same thing at the start of every season but this does look for all the world like the most fiercely contested title race in years. Manchester City have started like a train but every team has a dip and the likes of Liverpool, Tottenham, Arsenal and Manchester United look very well-placed to capitalise.

So to the weekend and the trip to a struggling Swansea. On paper it looks like the perfect game to employ the gegenpress against a team who will come at Liverpool in a desperate attempt to get some more points on the board.

With only 3 players struggling – Ojo, Gomez and Lovren – the squad looks healthy. TFF was struggling to find a starting berth for Adam Lallana at the start of the season but his form has been such that he has to play.

So here’s our XI to take the points at Swansea.

Liverpool fans: is this now your strongest XI? 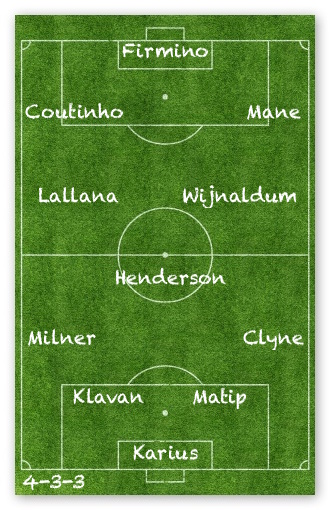