Rarely has TFF witnessed such a fast-paced game as the one which took place between Manchester United and Liverpool at Old Trafford on Sunday.

Although the quality of the final ball and finishing wasn’t always top quality, the speed of play and pass and move was something to behold.

TFF feels that it would have been unfair on Manchester United had they ended the game empty handed. The progress in this side is there for all to see and they had the better chances in a game where Liverpool looked dangerous on the counter without having any really clear cut chances.

Nevertheless they once more confounded the critics – including TFF – who have criticised their defence this season. Even with a youngster thrown in last minute at full back they coped with United really well and restricted them to four or five good chances over the 90.

And, this was also a game where Manchester United summoned the spirit of old. A defeat at home would have been crushing in the context of the season but that fighting spirit, which has been largely missing since Sir Alex, resurfaced and United got the point which stretches their unbeaten record to ten games in all competitions.

Zlatan’s winner was exquisite and rounded off a wonderful spectacle.

Manchester United must follow this up with another victory if they are to keep pace with the top four. And the injury list is looking very good with only James Wilson out.

TFF feels that Manchester United played their strongest XI on Sunday – apart from a fully fit Luke Shaw and Eric Bailly – and Jose must keep using Martial, Zlatan and Mkhitaryan up top.

Here’s how we think United should line up against Stoke. 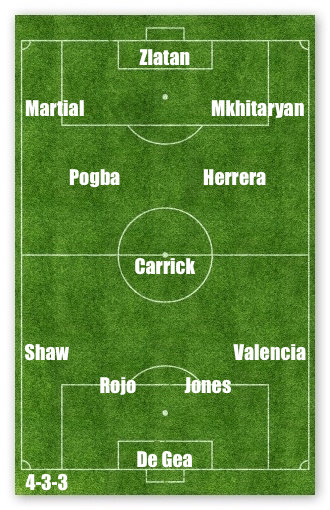