Manchester United have suffered a lot of injuries lately as the sheer volume of games that they have had to play this season has started to take its toll.

So it was great to hear Manchester United manager Jose Mourinho state that three of the crucial injured list – Phil Jones, Chris Smalling and Paul Pogba – are all available to play in their crunch Europa League semi-final first leg against Celtic Vigo in Spain on Thursday night.

Manchester United have been particularly thin on the ground in terms of defenders of late as Marcos Rojo has been the latest to get injured for the rest of the season. So the return of Jones and Smalling – who played really well earlier in the season – will be music to the ears of Manchester United fans.

And perhaps even more crucially Manchester United will welcome back the brilliant French international Paul Pogba for the game. Pogba’s influence has grown in the midfield throughout the season and he is now a big miss whenever he’s absent through injury.

Jose is quoted by Sky Sports as saying:

“Smalling, Jones and Pogba are back and, in relation to the Europa League, it’s very important.”

In another filip for the club the Portuguese head coach also stated that the brilliant Ivory Coast international Eric Bailly will also be fit and in contention for a place in the starting XI for Manchester United in a tricky looking away tie.

So here is how TFF sees Manchester United lining up and we think that this one looks like a nailed on draw. 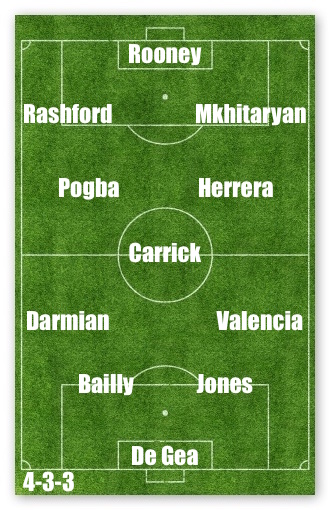