The media seems to be courting the opinion of of Manchester United manager Jose Mourinho on a regular basis right now about the form and inclusion of young Frenchman Anthony Martial.

The 21-year-old had an unbelievable first season at Manchester United scoring 17 goals in 46 appearances for his new club. But this season has been very stop start for the French international and there have been many fans calling for him to be included more frequently.

Mourinho was asked again this week, in his press conference, about whether Martial would play against Hull after a really good performance against Wigan in the FA Cup at the weekend.

But he was typically assertive about the situation and said:

‘He has to perform better than the others who are competing for the same positions,’

‘Do you want me to leave Henrikh Mkhitaryan out after he was man of the match and played so well? I can’t. The players pick themselves. Mkhitaryan has to play. Simple.’

TFF strongly believes that Martial is one of Manchester United’s best players – on form he’s the very best in the squad. But the only way that he can find momentum is by playing on a regular basis and it looks as if he could be back on the bench against Hull on Wednesday evening.

We would have them in the starting line up every time because he is frighteningly quick and dribbles so dangerously with the ball close to his feet. But maybe we should expect another player to be given a run out in what looks like a guaranteed three points.

Jesse Lingard has had very few minutes recently and so too has Marcus Rashford, who has played brilliantly when called upon. So we’re going to go for Rashford as an alternative to Martial if he is rested again. Apart from that the team is starting to look quite settled with only Eric Bailly to come back in once he’s over his latest injury and the African Cup of Nations rigours. 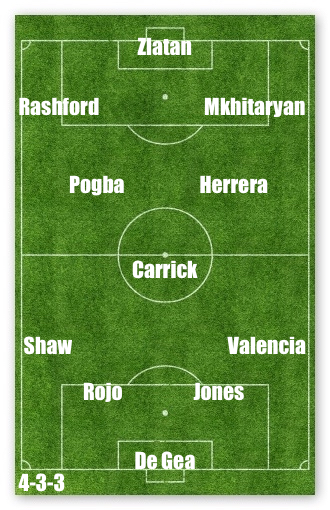