Manchester United superstar Zlatan missed the midweek victory over Hull in the league cup because of illness. But Jose Mourinho gave an update which bodes well for his inclusion on Saturday.

When asked if the player’s illness would keep him out of the Liverpool game, the Manchester United manager stated:

United put out a surprisingly strong team against Hull in midweek but Jose Mourinho clearly wanted to keep the momentum going after a winning streak of 8 games – which was extended to 9 after the Hull win.

The last time that United had a winning run this good was in 2009 when the Reds were just a few games away from a quadruple. They were ultimately undone by Lionel Messi in the Champions League final that year.

But this is a team in form and one which looks more convincing than at any time since Sir Alex departed from the position of manager.

Jose Mourinho seems to have stopped moaning so much at the press and has knuckled down to making Manchester United great again.

And TFF can see a top team and a strongest XI forming. He still uses Anthony Martial sparingly but the player has been sensational of late and is regularly cutting opposition defences to ribbons.

On the other side Henrikh Mkhitaryan missed so many chances against Hull but his general form is equally impressive.

Mourinho may, rather frustratingly, decide to only use one of these guys from the start and play a more defensively-minded wide man like Jesse Lingard.

But we would love to see both unleashed because, from a neutral perspective, it would surley improve the spectacle.

So here is TFF’s predicted XI. Manchester United fans – is this the best team to take the points? 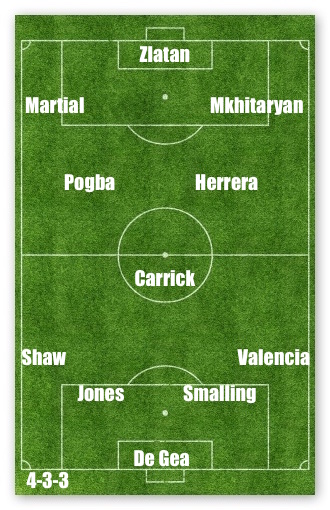