Manchester United fans will be desperate for TFF not to apply the kiss of death to the Christmas period.

But with eminently winnable fixtures at Old Trafford against Sunderland and Middlesboro to come, Manchester United will be confident of building on their best record of the season of three back-to-back wins on the bounce.

And there is great news on the injury front with both Eric Bailly and Henrikh Mkhitaryan in the squad to face Sunderland. The Sun reports:

ERIC BAILLY will be included in the match-day squad alongside Henrikh Mkhitaryan. But Luke Shaw remains a major doubt.

‘The squad is looking good. Even Luke Shaw’s injury is coming to an end,’

The Armenian put in two man of the match performances before taking a heavy challenge against Tottenham and Jose will surely be keen to throw him straight back into the fold in a game which Manchester United should largely play on the front foot.

As for Bailly, he got an injury almost immediately after returning from an extended absence due to a knee problem but has shaken off the injury to the other knee much more quickly. TFF thinks that he may not be risked for this one but will play on Wednesday against Middlesboro. Manchester United have a settled defence right now and there is no need to change it. That said, Chris Smalling is back in training and he could also make a start.

But here is how TFF sees Manchester United lining up and United fans will hope that Anthony Martial makes another start after an inconsistent season so far.

United fans: the best XI to get the job done? 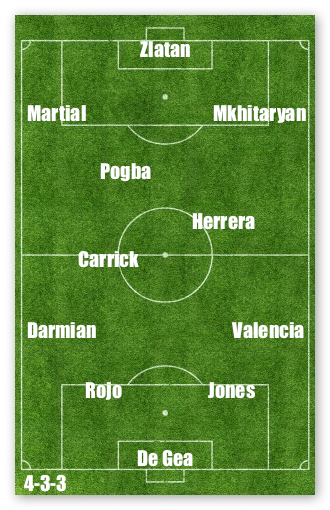