We have seen with Zlatan this season that bringing veterans into your club can have a massive impact.

But Manchester United fans love young players to come into the club who can grow and become world stars over the space of a longer period of time.

But he would probably expect to be starting if he did join the club so he is going into our speculative XI.

The other two players to be strongly linked today are Atletico Madrid stars Saul Niguez and Antoine Griezmann.

Now these two are players to get really excited about.

Antoine Griezmann has had a sensational three or four years in which he has been converted from his role as a winger to become a number nine of world class.

He was one of the standout players at Euro 2016 and has once more hit the ground running in La Liga this season. He has to be one of the most sought after players in Europe right now and Manchester United are apparently prepared to put out all the stops to get him.

The release clauses of Griezmann and Saul Niguez are said to be in the region of a combined £145 million. But we’ve seen United’s spending over the last few years and they are clearly not scared to do it again.

These two would expect to go straight into the first team and make it really difficult for players like Ander Herrera and Michael Carrick to get into the side beyond this season.

So here is a potential XI for Manchester United to be lining up with by the start of next season and it looks very tasty indeed. 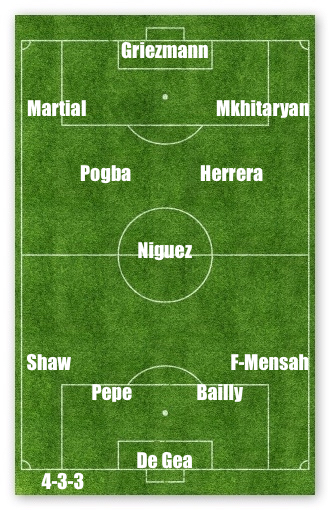