Liverpool once more suggested during their titanic battle with force rivals Manchester United on Sunday at Old Trafford that they can more than hold their own in this title race.

Because, while Manchester United are some way back in the race at this stage, they have improved considerably of late and are a match for anyone under Jose Mourinho at Old Trafford. Make no mistake, this is as tough a challenge as you will face in the Premier League at this moment.

Liverpool had less clear chances in the 90 minutes but were naturally more cautious when they had a lead to protect.

Even with a youngster thrown into defence the coped admirably as a unit and Manchester United were seldom able to pierce the rearguard.

Zlatan gave the result a certain justice but Liverpool will be the happier of the two with the point, despite the late equaliser. A defeat would have brought Manchester United within one game of overtaking them but now the Red Devils are still at arms length.

So how much will Jurgen Klopp prioritise the FA Cup replay?

With Liverpool at home to Swansea on Saturday Klopp can surely afford to put a strong side out. The Fa Cup may not have quite the cache of old but it’s still a competition well worth winning and a defeat to Plymouth would not be good for morale. Furthermore Liverpool’s German manager is a natural born winner and it’s difficult to imagine his fires not burning at the thought of another victory.

Nathaniel Clyne and Marko Grujic are in contention for returns after slight injuries which leaves just Danny Ings and Bogdan crocked.

So here is an XI to get the job done. Liverpool fans: how strong a team will Liverpool field? 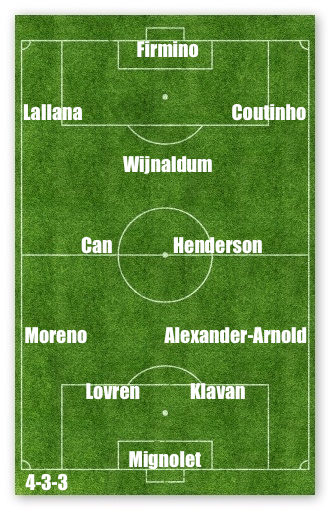