Manchester United are improving according to TFF. There is a more direct and assertive style about the team since Jose Mourinho took over.

Had they beaten Arsenal there would have been a feel good factor about the place. But the dispiriting last minute equaliser for Arsenal means that this remains a season which is yet to really get going for the Red Devils.

And with Manchester United now 9 points off the top of the table the Europa League looks an ever more interesting potential route into next year’s Champions League. United are comfortably one of the strongest sides in the competition and they need a win on Thursday to ease themselves into second place in the group ahead of the final group fixtures.

Manchester United manager Jose Mourinho has given one nugget of information about his selection for the game.

“Yes. I told him today [Saturday] that he is going to be involved in the game against Feyenoord. He is trying. Obviously he is not happy but he is transforming his frustration in a good way, which is to close the mouth, work hard and try to adapt.

“I told him ‘this was not the game for you’ because I don’t think he needs 10 or 20 minutes from the bench. I said ‘I think you need a good game and you need to either start or, if not, to come for the second half’. He needs less pressure and better conditions for him to express his qualities.”

TFF is a big fan of the Armenian and feel that when he starts to perform we could see Manchester United transformed into the fluent attacking unit that we have seldom seen in the last few years.

If will be interesting to see if he plays wide or at number ten. We feel that a central spot could be his preferred role.

So here is how we see Manchester United lining up for what should be an entertaining tie and one which could bring goals.

Manchester United fans: is this team strong enough to get over the line against the Dutch side? 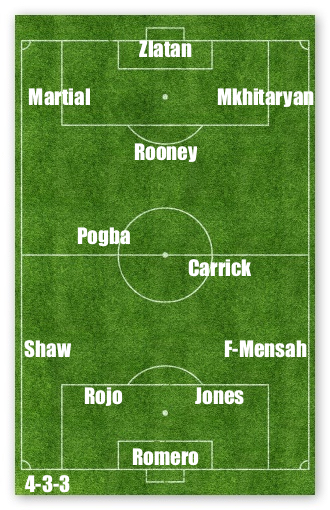