Tottenham were really convincing in their 3-0 defeat of Hull and they didn’t need the services of Moussa Dembele to record a comfortable win which keeps them in touch with the leading pack.

But few can argue that Dembele has been one of the star performers during Mauricio Pochettino’s time at the club and he is as vital to the team as anyone in that strongest line up with his lovely left foot.

He effortlessly glides around the park, picking up the pieces and starting attacks and TFF loves him.

So he goes straight back into that side against Burnley if fit at the weekend.

Burnley should provide more stubborn and spirited opposition than Hull but Spurs simply have to take three points if they want more Champions League action next term.

The injury list is looking good with only Vincent Janssen and Eric Lamela injured. The pace and incisiveness of the Argentine has been missed at the top end of the park for Tottenham but he isn’t quite ready for a return and may be back just after Christmas, according to our research.

Sissoko got some more vital minutes in the Hull game and TFF is going to keep him in there and give Wanyama a rest for this one. He, like Vertonghen and Walker, are only one booking away from a one match suspension.

Christian Eriksen has returned to form and his goals could catapult Spurs to greater consistency over the next few weeks.

Here’s our best XI for a game in which anything less than three points will leave a very sour taste in the mouth for the north Londoners. Tottenham fans – discuss…. 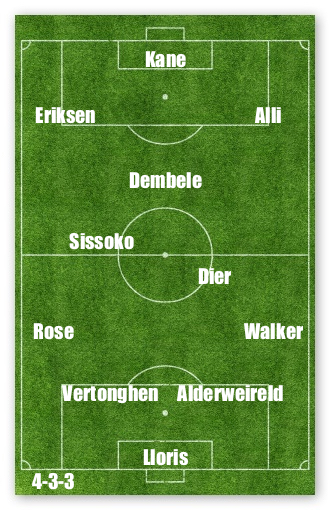