Tottenham have shown signs of life again recently after a comparatively disappointing start to the season. The return of Harry Kane seems to have coincided with an upturn in form and Spurs will will go to Old Trafford on Sunday with a genuine chance of getting three points.

Perhaps the biggest problem for Tottenham in the first few months of the season has been that the heavy investment they made in the summer hasn’t really paid off as yet.

Janssen is currently injured but hasn’t made the desired impact in attack. Sissoko has been really poor and, of the new signings, only Victor Wanyama has resembled a player with a big future at the club.

Even a week is a long time in football and form and fortunes can quickly change but TFF doesn’t fancy two of the three new boys as starters this weekend.

Apart from the crocked Janssen, Erik Lamela is the only other big absentee and he looks a doubt for this weekend. But Tottenham boss Mauricio Pochettino may well add another midfielder to the mix in order to repel Manchester United’s improving team at Old Trafford anyway.

The defence looks solid and Dele Alli is starting to show the sort of form which made him such a phenom last season. TFF would have him in the side, when fit, every time.

So here is what TFF believes is a Tottenham side that is solid but to daring enough to go to Old Trafford and get three points. Spurs fans – is this the team to get the win or are you about to vent spleen in the comments box with your unparalleled intensity and ire? 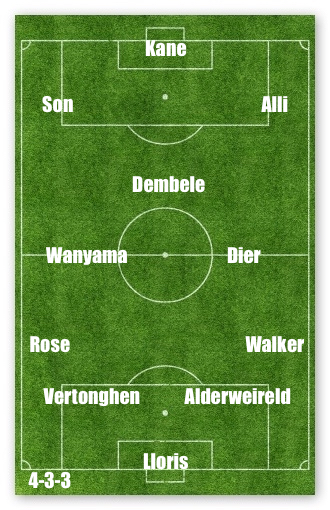