Tottenham were superb again at the weekend, coming back from two goals down to salvage a creditable draw at one of the toughest opponents in the land.

And, if it disturbed their winning run, they had to be the happier side at the final whistle in a game which they left relatively unscathed.

The one area of Tottenham’s side which is really threadbare right now is in defence. With Toby Alderweireld injured in this match and Jan Vertonghen out until the second week of March, Tottenham will have to cope with a makeshift back four in place of one of the best partnerships in the league.

Wimmer and perhaps Dier will start this week if Alderweireld doesn’t make it but the only further injury in the squad is the protracted problem with Erik Lamela which shows little sign of being sorted out in the short-term. But the timing of the injuries could be worse and Tottenham will surely be able to cope with the attack of Wycombe with ease – even with their first choice defence somewhat crocked.

The rest of the squad looks fit and the magic between Dele Alli and Harry Kane is once more visible to everyone. Spurs were a bit flat in the early part of the season but they are one more one of the best sides to watch in the division with so many attacking options.

Son Heung-min has done a great job whenever called upon this season and has been an excellent addition to the squad. He may feel a little hard done by to be left out of the starting line up but we are going to stick with the tried and tested formula of Eriksen, Kane and Alli in the most advanced positions.

So here is our XI to get the game won early so that Spurs can conserve energy and take some big hitters off in the second half.

Tottenham fans: would you field a weaker side? 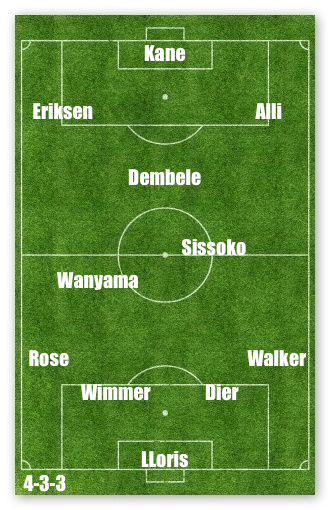