TFF recently opined that no one could stop Chelsea in their bid to take the title this season.

Just four weeks ago they were 13 points clear and seemingly coasting.

But defeats in quick succession to Manchester United and Crystal Palace have left them in a less comfortable situation.

And that is because Tottenham have also been on fire.

Mauricio Pochettino’s men have supplanted Chelsea as the team that looks impossible to beat and it makes for fascinating viewing this weekend.

Wembley hasn’t always been Tottenham’s favourite venue and perhaps their hard running style is less effective on the bigger surface.

But they will feel confident going in to this one on the back of their best form of the season. A psychological advantage may also be gleaned for the winner.

In terms of injuries the long running saga with Erik Lamela shows no sign of abating this season.

Danny Rose will most likely be out until the end of April and will miss this one. Harry Winks is also a major doubt as he recovers from an ankle injury.

But Spurs still look very strong at this point and TFF fancies them to get through this one in what could be seen as a slight surprise.

So here is our XI to keep Chelsea at bay and hit them on the counter to great effect. Tottenham fans: is this your best team for the game? 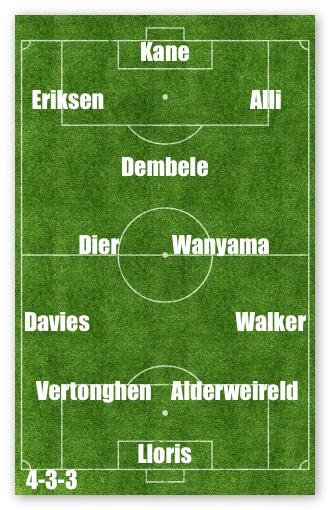