Manchester City aren’t mucking about in the transfer market this season and they look like they want to kick on to domestic and Champions League dominance next term if their early summer business is anything to go by.

They have already signed the brilliant Bernardo Silva from Monaco for an eye-bulging £43.6 million and they certainly aren’t sitting around gloating about that one.

Because The Guardian also reported this week that Manchester city are about to sign Ederson from Portuguese club Benfica in another whopping deal.

And reports today suggest that the club are also interested in the inordinate talents of Monaco striker Kylian Mbappe.

He’s another centre forward and Manchester City already boast some of the best in the world in that position.

If they managed to sign Mbappe for a whopping 115 million GBP then they would surely have the best that France has to offer. At 18 years of age he’s still got a long way to go in order to get to the top of the game.

But we can see Manchester City forming a deadly and fluid front three in a style not dissimilar to the way that Barcelona like to line up. The current Barcelona front three is Messi, Neymar and Suarez and all of them could claim to be number nines.

This potential Manchester City trio are all intelligent players and we strongly believe that they could do the job together if they were asked to play in a 4-3-3. With such an unbelievable squad already Manchester City would have to leave out some big hitters in order to accommodate all of these guys but they would simply outscore most of the opposition most weeks.

So here is how Manchester City could line up with these three stars and we would expect them to bring in a couple of full backs this summer too.

City fans- would this be the best team you have ever had? 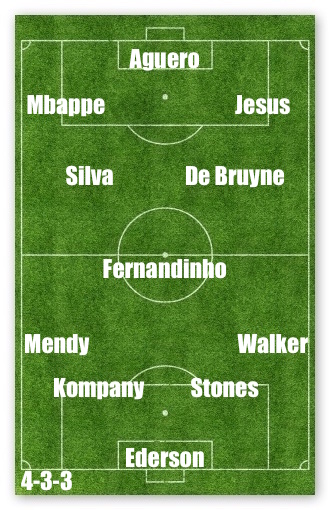