England seldom perform particularly well at international level which is sometimes difficult to explain considering the rich vein of English talent which has run through the Premier League over the years. Here is TFF’s take on the best Xi the tread the boards of the most exciting league in club football.

Never the most spectacular keeper but David Seaman was one of the most consistent performers in England and Arsenal history.

Apart from that slight clanger against Brazil in World Cup 2002, it’s difficult to think of any high profile mistakes that he made in his illustrious career.

And he also seemed like a thoroughly nice guy to boot.

Another who seemed to give at least a 7/10 performance every week of his professional career.

Cole was never the most popular player – particularly after leaving Arsenal in an acrimonious move to Chelsea – but even the most ardent Gunners fan would begrudgingly admit that Cole was a top quality player and possibly the best left back in the world in his pomp.

He was never a flair player but safe as houses and indefatigable.

One of TFF’s all time favourite players. England could rarely claim to have the best player in the world. But, this best, there was no one who could touch in as a centre back in the modern game.

He was extremely quick and athletic and he made defending into an art form. One of the most elegant players you will ever see.

Ferdinand regularly made a mockery of opposition forwards and had more skill than many of them.

An absolute beast of a player who wanted to win at all costs. And every top team tends to have one of those.

Terry had nowhere near the skill levels of Ferdinand but his leadership ability was second to none and his organisational skills made most defences that he played in completely watertight.

Like Terry, Neville was never going to be the most talented boy in the team but he had such desire to win and professionalism that he made himself a pivotal part of Manchester United’s success and was a mainstay of the England side until a bad ankle injury forced him out of the game.

A born winner and an intelligent footballer who would solidify any defence.

Better right wingers have arguably graced the Premier League but, in terms Englishmen, Beckham is in a class of his own.

His technique was never in doubt but, while he lost some of his physical prowess in his late twenties, he was at his best in the early days at Manchester United where he never stopped running.

Beckham was a machine like player who covered every blade of grass but also had true quality in that right boot.

He scored 85 goals in 394 appearances for Manchester United, 20 in 155 for Real Madrid and captained England for whom he played 115 times and scored 17 goals.

An absolute master of his trade for Manchester United and a player who was criminally underused by England. If he was Italian he might still be playing now!

A box-to-box maestro who seldom let his side down and dragged Liverpool to victory time after time.

A very controversial choice you might think. But in years to come we hope that this selection proves to be prophetic. Because TFF believes that Alli has the football world at his feet.

Keeping Frank Lampard out of the XI is high praise indeed.

What can you say about Shearer except that he was utterly deadly in front of goal.

Possibly the best English player of the Premier League era. Certainly the most exciting in his early days as he tore into the opponent almost single-handedly and scored beautiful goals to boot. 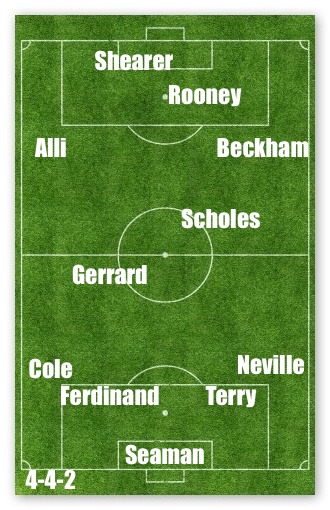