No real competition here as Claudio Bravo has quickened pulses but in the wrong way this season. He may have settled somewhat of late but he’s still something of a liability and Manchester City will surely look to the transfer market again this summer for a long-term solution. Courtois, meanwhile, is top class.

Manchester City have veteran full backs and will surely invest in this area in the summer too. No such problems at Chelsea where Cesar is a superb and adaptable defender in is pomp.

He has his critics and isn’t always the safest player on the park. But his quality is obvious and he will turn out to be a wonderful signing for Manchester City.

A real surprise package this season for Chelsea, despite his huge fee. Antonio Conte has found the perfect position for him at the head of a back three and although he may still be vulnerable at defending in a two he has to get in the side based on his form this season.

He’s been more of a wing back his season for Chelsea but he just pips the tiring but brilliant Pablo Zabaleta.

There is little doubt that he would be in pretty much everyones’ combined XI on form.

It looks as if one of the best midfielders in world football is going to win back to back titles with Chelsea and Leicester. He simply never stops moving and rarely wastes the ball. Makelele MK II!

It hasn’t been his best season by a long chalk but Silva is still just too good to leave out of any team with the chance to select him.

We could have selected Leroy Sane, Willian or Pedro for this role on the right wing. And, on form, perhaps Pedro deserves the nod. But, again, De Bruyne is just too good not to pick.

One of TFF’s favourite players – Aguero often makes it appear as if the opponent is playing in slow motion. 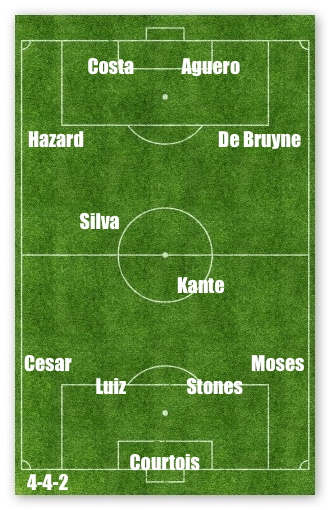